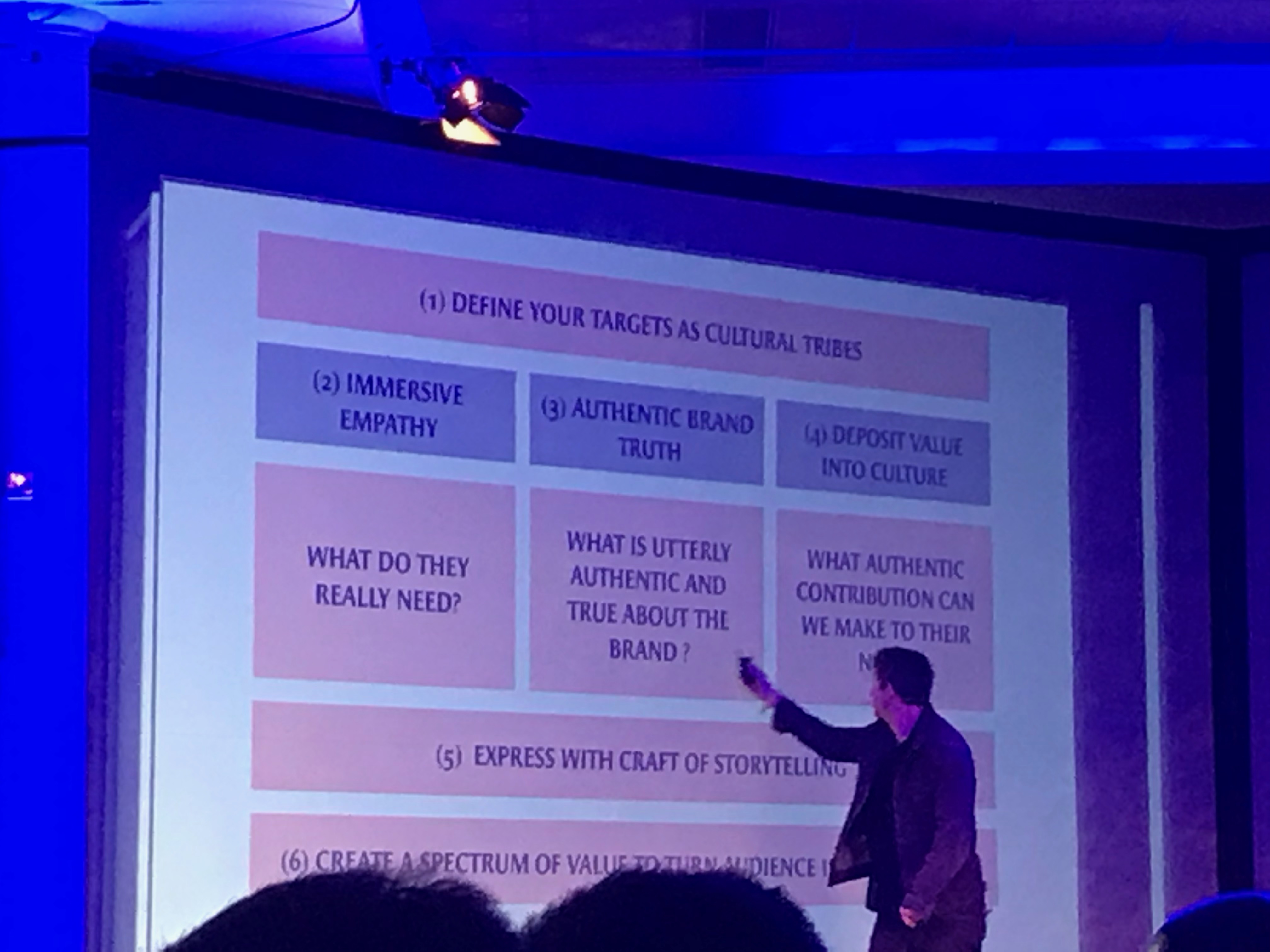 I spent Wednesday afternoon mooching around #DTS19 in its new home in the RDS. 1 panel discussion, 1 fireside chat, 1 career talk and 1 redefining marketing presentation that made my day all playing their part in helping me forget the F-OFF car on display on arrival, very 80s and very male, we were spared the bikinis!

Panel Discussion – The Intersection of AI and Human Decision-making
I started off with a fairly inane panel discussion moderated by Adam Smith, Contributing Editor of PCMag UK. I couldn’t help feeling that he hadn’t conducted his pre-interview interviews with panelists Harry Glaser (Periscope Data), Emily Orton (Darktrace) and Bridget Perry (Adobe). Smith trotted out the textbook AI questions which the panelists thankfully ignored for the most part to lead the conversation in a more interesting direction. Orton opened with a clarification of the terms given their misuse and described ‘Machine Learning’ as that which humans teach technology to do faster or better compared to ‘AI’ as what technology does that humans cannot do. Glaser talked more about the trade-off between accuracy and explainability and how explainability will always have to win out. Poor Perry had very little to say on the subject, only that she was so impressed with everything that she sees.

Lock-in: The Cult of Extreme Innovation
Next up was Mark Adams, Head of Innovation of VICE Media. Although he took his time to warm up, a few of his jokes didn’t quite land and he spent far too much time on the prologue, these messy opening minutes were soon eclipsed by the quality of his message about shallow demographic targeting which results in product obsessive, gimmicky, rubbish creative executions. He provided a few damning examples of shoddy social media campaigns by global brands such as BurgerKing and Skoda, projects that were “accruing un-branding.”
Tribes
We are tribal and are united by our passions, not our vitals or postcodes. The platforms [varied social media] are expressions of the internet which is a network of networks. If you don’t focus on networks, you’re not in the game. Alas, because of the long prologue, he had to race through his examples. One major one being how he spotted all the buzz about the Fyre Festival among his networks and bought up the video content which then became that Netflix documentary which has since resulted in about 15 other commissions.
Deposit value to extract value
Companies have to walk the walk. It’s not enough to casually support issues like equality or paternity leave without actually leading by example. If you’re sponsoring a music festival and loosely talking about equality, then use your power to insist that the line-up has to be gender balanced.

Lead a tribe and your tribe will follow. Stop wasting time following gimmicks and fads because the best outcome of that strategy is that you’ll end up the same as everyone else!

It was a pleasure to see Pete Townsend, Founder & CEO of Norio Ventures, actually interview his guest. It was obvious from the start that they’d spoken at length in advance and Townsend knew exactly what ground he wanted Alisie to cover. A quirky tale of how his father’s recovery from a stroke in a hospital that was due to be shut down showed a young Alisie the power that he and other little people can wield when they work together. Some years later, he came across bitcoin chats on forums and felt the community needed a destination and promptly co-founded Bitcoin Magazine and later became one of the original four Ethereum Founders. The AKASHA Foundation, a non-profit born at the intersection of blockchain and collective intelligence, is his latest passion. To be brutally honest, I didn’t really understand what the project / organisation is about and ten minutes on the website didn’t provide the necessary enligthenment but I’m sure it will be fabulous. Nice chap.

Designing your career in Design

Patrick Mooney, Director of User Experience at Optum concluded my afternoon’s edutainment. Mooney traced his career from schoolboy html [building school website in 1996], to computer studies in DCU whilst working in healthcare to part-timing in Ireland’s nascent internet scene to landing his dream job in Labyrinth, yes I remember them. Then over to BT for almost two decades during which time he discovered he was a closet UX designer and made the executive decision to actively switch discipline and the rest, they say, is history. Fast forward to today, he’s Director of User Experience at Optum and the man behind Dublin UX, a meet-up group for UX & UI designers and developers. Aside from detailing his career path, Mooney provided 10 tips to get the design career you want peppered with excellent advice and reference material from Dan Saffer, Jakob Nielsen, Leah Buley and more. We were also introduced to two other beasts – the HIPPO [Highest (income) Paid Person’s Opinion] and the UX Unicorn – the elusive animal that is competent in every aspect of UX, similar to the marketing unicorn that has been plaguing me my entire career!

Tip 1: Understand what design means
Tip 2: Understand UX Design
To do this you need to evaluate the effects and overall experience of the design. You need to assess its impact afterward. It needs to be user-centred.
Tip 3: Realise UX design is not UI design,
“Can you just make it look better?” “No.” UX design is about solving problems
Tip 4: Beware of UX Unicorn
It takes a team to solve all problems. Don’t mix up your disciplines, classify them! IXD, IA, motion designer, interaction designer.
Tip 5: Don’t please HiPPOs (Highest Important Paid Person Opinion)
Don’t let the uninformed opinions overpower yours
Tip 6: Collaboration
Continuous learning is key to growth and design needs to be seen as a team sport.
Tip 7: Be research driven
You are not your user, get out there and find out who they are…and what they want.
Tip 8: Where does design sit?
How do we get design a seat at the table vs how do we get a new table? Make UX design an independent discipline & see its impact increase
Tip 9: Understand the UX design maturity model
Tip 10: Be agile

Bumped into a few of the usual suspects, chatted to a few start-ups and legged it for the train. Result=happiness.